I’ve been pattern testing a lot lately and while I enjoy it, I’ve gotten more selective on what projects I’ll undertake and sign up for.  I rarely will sew anything that takes more than a couple of hours- I try my hardest to sew only during naptime and I hate leaving unfinished projects.  That said, there are still certain designers I jump at the chance to test for and Adrianna of Hey June is one of them.  Her latest pattern is really three patterns in one and it is fantastic!

I made view C in a size 12 for my eleven-year-old.  We both love, love this hoodie.  He picked out the french terry and it was perfect for this pattern.  I sew a ton but there are still so many techniques that I’ve never done (meaning I’ve avoided them as long as possible ).  This was my first zippered jacket and Adrianna walks you through it beautifully and the finish on the inside is so profesh!

I proudly held up the finished sweatshirt to my husband and said, “You’ve got to see this!” To which he said. “Oh yeah, I saw that.  I totally thought you bought that so I didn’t say anything.”  I’ll take that as “that-sweatshirt-is-incredibly-well-made-and-looks-like-a-million-bucks” and all the glory goes to Adrianna’s impeccable finishing techniques that make the inside as clean and pretty as the outside.

Sophie got view A in a size 7 out of yummy sweater knit from LA.  It’s got a touch of my favorite knock-off Liberty print as the facing.  With Sophie, I’ve decided that if I would wear it then she would love it too.  She is my mini-me in so many ways and I love that we share almost the exact taste in clothes.  I’ll live it up while I can. 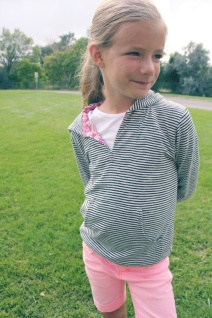 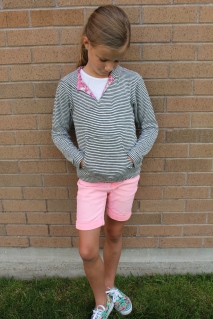 I love this picture I caught of the two of them- totally their personalities.  Alex is always a crack-up and Soph has got this model thing down.

After the two I tested I couldn’t wait to recreate a hoodie I’d seen on Pinterest.

I used view A and sized up two sizes for ease, leaving off the bands.  I used a mystery gauzy-linen that had some give to it and it was exactly what I was going for.

It just reminds me so much of growing up in Southern California.  It’s made for bonfires at the beach and cool summer nights. This one is my favorite and I want it in my size so badly! We’re twisting Adrianna’s arm to get a ladies version out pronto!

This site uses Akismet to reduce spam. Learn how your comment data is processed.